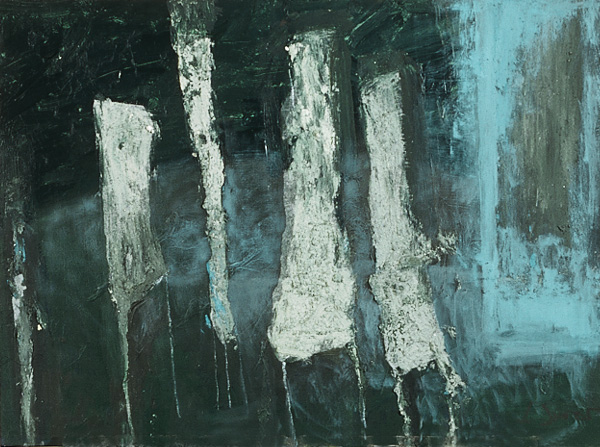 When, carried by the merciless wind of History, we are forced to leave the land of our ancestors, of our roots. When the memory of the happiness of childhood and the family atmosphere, swamped through the seasons and jewish traditions fades gradually… what remains in our broken memories ?

Moreover, when you have the chance to be a painter, what are exile’s colors that should be printed on the palette and the canvas ?

Between her needs for symbolic research of her own roots, the control of her new but still fragile identity, and the duty to formal mordernity in an artistic expression of catharsis, the painting of Lisa Seror has evolved to strip back to the essentials.

What the artist now suggests through the figures of her abandoned chairs, whether they are represented in groups or alone, stiff or lopsided, realistic or abstract, framed or released into nothingness, is that it is no more about a personnal emptiness and linked to a community (as Proust did with his madeleines) but it is now a much broader existential emptiness that requires an eschatological vision as Ionesco could have done. Chairs becomes the incarnation of ontological emptiness.

As Alberto Giacometti would say « I know i could spend the rest of my life copying a chair ».

We can predict to Lisa Seror that she has many year in front of her, to paint splendid and never ending variations on empty chairs, before she exhausts this fundamental and existential questioning that Eugene Ionesco also wanted to share to his own, as he stated : « Evanescence, the viduity of a world, which is here, which isn’t here, which will no longer be… »